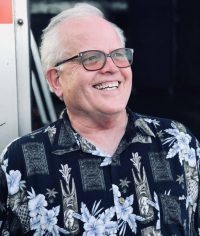 Jim “Fish” Michie, well-known to Mississippi music fans from his days as keyboardist for the Tangents, a hard-driving R&B band from the 1980-90s, returns to Jackson, MS this Saturday, Aug. 20. Michie will perform at Hal and Mals at 7:30 pm as part of Thacker Mountain Radio Hour’s house band, the Yalobushwhackers. Admission is $10 at the door.

The show is hosted by Jim Dees and house band, the Yalobushwhackers with Michie on piano, who will open and close the show.

The Yalobushwhackers include Ricky Burkhead on drums, Slade Lewis on bass and Paul Tate on guitar and vocals. The Book Festival show will air on public radio stations next week including on Mississippi Public Broadcasting on Saturday, Aug. 27 at 7 pm.

Dees says his crew is excited to return to the book festival – with an audience – after last year’s festival was forced into recorded events due to Covid.

“Having the return of an in-person festival means so much to all concerned,” Dees opined. “It’s a morale boost to the Festival organizers, the city of Jackson, authors and the reading public, and radio shows like ours. We look forward to seeing lots of old friends including having Fish with us.”

Come cool off with us!