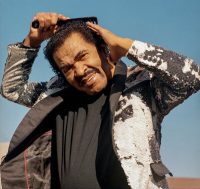 At age 87 he still has better hair than you.

More hit records too. In fact, 2021 has brought more acclaim than ever to bluesman Bobby Rush and his astonishing 70-years in show business. This year Bobby won his second Grammy for Best Traditional Blues for his album, Rawer Than Raw. He also published his memoir, I Ain’t Studdin’ Ya – My American Blues Story (Hachette Books).

Rush won his first Grammy in 2017 for Best Traditional Blues Album for Porcupine Meat, produced by Scott Billington. His next album, Sitting on Top of the Blues, received a Grammy nomination bringing a total of four for Rush, along with his 51 Blues Music Award nominations and 13 wins.

Rush ended 2020 with a cameo role in the Golden Globe-nominated Eddie Murphy film hit, Dolemite Is My Name. In his raucous scene with Murphy, he crushed it.

Those of us who have been fans of Bobby Rush since the 1980s, (including a memorable 1987 Hoka appearance when he made four costume changes – and there was no backstage!) have watched music and fashion change over the years. Bobby has only gotten better. He never went disco.

Bobby’s book – I Ain’t Studdin’ Ya – is a very telling history of life for rural Black folks in the 1940s. We also get a down and dirty look at the streets of Chicago in the 1950s on the South Side with legends-in-the-making Muddy, Little Walter, Elmore, Buddy, B.B. and more.

It’s not lost on Bobby that he and Buddy Guy are the last men standing of that seminal group.

Bobby’s book, at its soul, is a story of family and Bobby’s devotion to his. He is one of the rare bluesmen of his era who grew up with both parents in the home with him and his siblings. He learned the value of work but once he discovered gospel and blues – that was it!

Even though he loved them all, Bobby Rush had to leave home at 13 (!) to get his groove on!

Now, so many eventful decades later, after so much upheaval and loss and nearing his 9th decade, finally, renewal. And Bobby Rush is still groovin’.

But don’t take my word for it. Come see and hear for yourself. We’ll have copies of his book for sale. Snag one and get him to sign it.

After all, “an American blues story” means, it’s your story too.