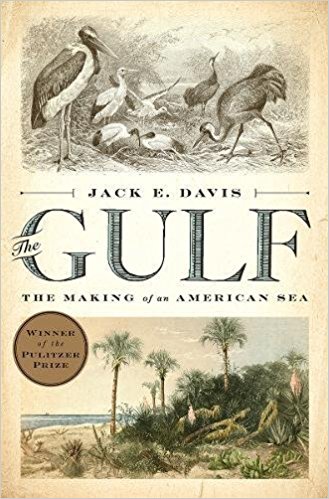 by Jim Dees – Jack E. Davis’ loving but unsparing history of the Gulf of Mexico, The Gulf – The Making of an American Sea is, like its namesake, teeming with wild life – human and marine. The real-life human characters Davis brings to the page – anglers, artists, writers, roughnecks, and sleazeball tycoons – propel his narrative and are every bit as colorful as the redfish and egrets.

“My favorite character in the book is Walter Anderson,” Davis says in a phone interview, referring to the gonzo painter (1903-1965) from Ocean Springs. “Even though it’s Chapter 12, I wrote it first because I knew Walter would show me what this book should be.”

What this book should be is … read, by anyone who grew up loving the Gulf coast – or appreciates any body of water. Davis spent six years researching the 530-page book. In April, The Gulf was awarded the 2018 Pulitzer Prize in History. Davis will appear on The Thacker Mountain Radio Hour this Saturday (8-25) in Ocean Springs, MS.

Davis grew up on Florida’s panhandle and his local’s love comes through in his prose. The New York Times called the book, “a lyrical paean.”

“We lived in Ft. Walton Beach on Santa Rosa Sound, right there on Highway 98,” Davis recalls. “There was no Baby Boomer neighborhood teeming with kids and bicycles. I was alone, there were no neighbors my age. My dog and I spent many days and afternoons in my boat out on the Sound exploring the spoil islands, just the waterway itself.

“I guess I was part of that last generation to stay in the woods except my woods was water.”

During his research trips around the Gulf for this book, Davis worked from a loose outline that he deliberately left open. “I let the writing show me where it wanted to go, how the history wanted to be written.”

Such an approach uncovered a rich cast of characters including Winslow Homer, the “painter laureate of the Atlantic” who loved the Gulf’s calm waters, and helped popularize the region’s fishing. Leonard Destin arrives in Florida by boat from Connecticut to start a little charter business. Warren G. Harding, Thomas Edison and Henry Ford built fishing lodges in Ft. Myers. Harding’s wife, Florence, caught the record tarpon at Port Isabel, Texas. Later in this saga, crime writer John D. McDonald protests dredging for condos in his beloved Sarasota, an area in the news today for its nature-killing algae blooms. (His environmental group is, “Save Our Bays,” aka, “the S.O.B.s”).

Then there is Nash Roberts, an independent meteorologist and TV weatherman in New Orleans. Starting in 1957, Roberts eschewed radar and later computers, relying instead on primitive instruments and his many Gulf sources. He scribbled out his “right as rain” forecasts on plastic weatherboard using felt-tip markers and correctly predicted the paths of hurricanes Betsy and Camille. He became a legend as the most accurate forecaster in the southeast. “What does Nash say?” became his viewers’ go-to weather query.

“When I came across Nash I thought, ‘Who is this guy?’” Davis laughs. “I started digging deeper. I found the kind of character who could really guide the narrative.” Roberts appears in the chapter devoted to Gulf hurricanes, “Wind and Water.” (Tom Hanks would crush the role of Nash Roberts in a movie version).

The concluding chapters report, in shameful detail, the pollution of the Gulf over the last 50 years. By the time you get to this sobering section you’ve begun to think of the Gulf as a friend and it hurts to see her mistreated. Indeed, this book will make you a fish-hugger.

Still, Davis manages to end the book on an upbeat note with a chapter on Cedar Key, Florida and its rebound with a vibrant clam industry.

“It’s not all gloom and doom,” Davis insists as we wind up our interview. “In the 1970s, virtually every bay and sound along the Gulf was on the verge of death from wastewater pollution and we’ve cleaned that up.

“You give nature the opportunity, it will come back – and come back in force.” He pauses. “Nobody is harmed by clean water. Not even the polluters.”

The Gulf – The Making of an American Sea should be in every hotel room on the Gulf coast from Brownsville to Key West, a Gideon’s Bible of necessary history. It should be issued to every household too, like a phone book, so all Gulf residents can call on their shared legacy.

Loving and caring about a body of water isn’t different from human love. As Davis shows us in this illuminating and profoundly important book, it all comes from the heart.

NOTE: No live broadcast. This show will air on Saturday, Sept. 1 at 7 pm (CT) on Mississippi Public Broadcasting and at 9 pm (CT) on Alabama Public Radio.