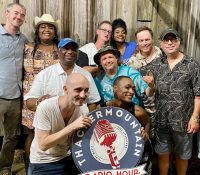 From my vantage point, standing onstage, only feet away from the hot-as-a-rocket Mississippi country group, Chapel Hart, the frenzied crowd response felt like a tsunami of euphoria. I could actually feel the heat. Then they turned it up a notch.

The ladies and their tight road band launched into their #1 hit, “You Can Have Him, Jolene,” their answer song to Dolly Parton’s “Jolene.”

The response was SEC football deafening.

And it all happened at the Neshoba County Fair in Neshoba County, Mississippi, “the “meanest place in America,” according to a long-ago pronouncement by Dr. Martin Luther King.

One can only speculate what the old “I-Have-A Dreamer” would have made of the love fest that unfolded here last Saturday night.

After a two-year hiatus, The Thacker Mountain Radio Hour returned to the Fair, the 133th edition of this red dirt event. We arrived to find a large, teeming crowd already waiting at Founder’s Square Pavilion. Maybe the first several rows were there for our show, but the extra hundreds who packed all the seating and the five-deep periphery, were there to see Chapel Hart.

The trio (sisters Danica and Devynn Hart and their cousin, Trea Swindle, all from Poplarville, MS) scored a rare “Golden Buzzer” on NBC’s America’s Got Talent (Google it. I had to.) just three days before the Fair. The resulting frenzy and YouTube video (5.8 million views and counting) set off a caravan of fans from Jackson and the surrounding area. The last of the $400 rooms at the nearby Golden Moon were snapped up quicker than a busted black-jack hand.

Just as we worried about the band having to fight the long lines to get onto the Fairgrounds, we watched slack-jawed as they pulled up with a full police escort.

“First time I’ve seen the cops before the gig,” deadpanned one of our crew.

The #1 single has prompted Dolly Parton and Loretta Lynn to tweet their support and Darius Rucker has announced the ladies will be on his next album. Even that most country of country venues, the Grand Ole Opry, has invited Chapel Hart to perform.

All of this is indeed sweet payback for a group who began their career harmonizing in front of a former strip joint on Royal Street in New Orleans for donated catfish plates.

Devynn told Yahoo News she wrote “You Can Have Him” after thinking about the plight of Dolly’s “Jolene.”

“If you think about that idea, it’s like, ’Who does this heifer think she is to take somebody, then turn around, and tell him that she can have him back?’ So I thought, ’What if we wrote a song from the other perspective, where the woman [who loses her partner] in ’Jolene’ is okay with losing him.”

One hesitates to liken all this to Elvis’ return to Tupelo in 1957 or the Beatles’ debut on Ed Sullivan in ’64, but being with these ladies on this night, with this vibe, did have the distinct feel of a beginning. A launch, perhaps. Something we will never again experience this up close and sweaty.

Likewise, one had to acknowledge the historic irony of a Neshoba County Sheriff’s escort of three proud, fierce, Black women.

As for Chapel Hart, this could very well be their last gig on a sawdust floor. They later tweeted: “Mississippi has us smiling from our souls tonight.”

For three hours on this humid evening, (after their one-hour set, Chapel Hart signed and posed with every fan who waited in line), some of Dr. King’s dream had come true.

And so had Chapel Hart’s.