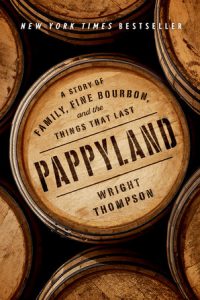 By Jim Dees – Wright Thompson, senior writer for ESPN, has written a book about bourbon and family that goes down like a warm shot of love. In Pappyland: A Story of Family, Fine Bourbon, and the Things That Last, the subject is more family than bourbon. The titular family is three generations of the Pappy Van Winkle family from Louisville, KY. But Thompson also paints an intimate portrait of his own family – specifically his and his wife Sonia’s efforts to start their own.

Thompson sets out to write about Julian Van Winkle III, the grandson of founder Pappy. He visits him over a 3-4-year period (driving the seven hours from Oxford) providing the reader with eyewitness accounts of the family’s remarkable series of trials, and also an insight into the increasing friendship between subject and author. The two men get tight in more than a bourbon way. They have deep conversations about life and purpose and ponder an essential question: How much do we owe our forebears?

As Thompson writes about his own father who died at age 58 – “I wanted to be able to stand confidently next to the idea of him.” (A tall order. Thompson later writes that after his dad, Walter Wright Thompson, passed away, his mother would find flashlights stashed around the house, one of his dad’s grand gestures, “as a reminder that he’d always be there, shining.”) The book takes on the sweep and feel of a sprawling saga but Thompson’s brisk but thoughtful pace sustains the story at 240 pages.

And what a story!

Pappy Van Winkle famously opened his distillery on Derby Day 1935. He was known to bird hunt during business hours and kennel his dogs at his office. One of them, Thunder, he trained to caddy his golf clubs. Pappy’s son, Julian Jr. was a tank commander in World War II and ran the the family business like one until the hip 1960s when bourbon was disdained as your “Dad’s drink.” James Bond drank martinis; hippies liked wine. Sales plummeted and the family lost their distillery.

In recent years, under Julian Van Winkle III’s watch, their bourbon has made a comeback for the ages, due to a confluence of unimaginable events and crazy-luck circumstance, all chronicled in Thompson’s award-winning (and bestselling: #7 on the New York Times list) style.

Currently, in 2021, with supplies limited due to the brand’s 25-year aging process (older than some of its eBay fans) and amid the clamor of a cult-like following of “whiskey nerds,” bottles of Pappy Van Winkle sell for thousands of dollars on the internet – if you can find it.

Or as Thompson writes, “Vodka is for the skinny and scotch is for strivers and bourbon is for the homesick.”

And this book, lyrically written with a big heart and lots of soul, is for everybody. Don’t miss Wright’s Thompson’s Thacker interview and reading this weekend! Check listings below!

This week on The Thacker Mountain Radio Hour: Wright Thompson with British folk singer Shirley Collins and the esoteric jazz stylings of Alex Greene and the Rolling Head Orchestra.