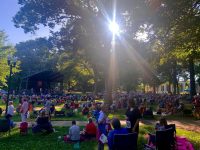 This Sunday, June 5 at 6 pm in the Grove, we’ll present two authors with direct ties to Oxford, including Taylor Brown, whose latest novel, Wingwalkers, has Oxford as its setting for at least half the book and William Faulkner as a main character. In Aimee Nezhukumatathil’s, World of Wonders, the opening essay, Catalpa Tree, recalls her mother’s admonishment to her and her sister to “not get too dark,” lest their Filipina /Malayali Indian complexions attract racism. She writes that the girls seek refuge under the large leaves of Catalpa trees in their then Kansas neighborhood.

Flash forward a couple of decades and Nezuhukumatathil, now a writing professor at Ole Miss, discovers the largest Catalpa tree in the state of Mississippi, sprawling itself out in the Grove, part of her daily walk through campus. She takes comfort and bitterweet memories in the tree.

A hot air balloon and a smashed chicken coop figure in the hilarious opening chapter of Wingwalkers set in 1908 on the Oxford Square. Taylor Brown has the audacity to put words in Faulkner’s mouth (!) and his dialogue somehow rings true.

“Got a metal plate in my head – that’s the only medal they ever gave me, bud.”

We hear “Billy” Faulkner instructing his brothers, John and Dean, as they build their first paper and paste airplane in their garage and the scolding of their (long-suffering) dad, Murry. Brown brings to life the family’s beloved Mammie Callie who managed their household and we also hear the lame jokes of the skeptical Oxford townsfolk who derided the fancy-dressed Faulkner as, “Count No Count.”

Even the actual Thacker Mountain, our namesake neighborhood south of Oxford, gets a shout-out.

A parallel story follows Zeno, a former WWI flying ace-turned-aerial barnstormer and his wife Della the Daring. Della puts the dare in dare-devil, she walks the wing of their Curtiss Flying Jenny, a two-seat bi-plane, without a parachute. The couple and their dog Sark, (named after the Scotch) fly over the backroads of the Depression-era Deep South charging for rides and performing loops.

The twin stories make for a flying joy-ride of a book, cutting back and forth between Faulkner’s literary career (Paris, New York, Hollywood) and his growing interest in “aeroplanes,” and the swash-buckling (mis)adventures of Zeno and Della.

At one point Brown brings the three of them together for a night of boozing in New Orleans at Mardi Gras in 1934 (led by Faulkner) that winds up in a memorable scene at the Hotel Monteleone. You can smell the French Quarter and taste the absinthe.

In his book notes, Brown says he was inspired to write Wingwalkers after visiting Square Books in 2016 and seeing a photo of the young Faulkner, dark-haired and mischievous, decked out in his Royal Flying Corps uniform. Brown had to know more.

We’ll ask him all about it Sunday.

Brown grew up on the Georgia coast. He has lived in Buenos Aires, San Francisco, and the mountains of western North Carolina. He currently resides in Savannah, Georgia. 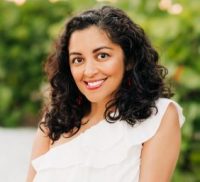 Aimee Nezhukumatathil is the author of the New York Times bestseller, World of Wonders – In Praise of Fireflies, Whale Sharks, and Other Astonishments. The book became a phenomenon, climbing the NY Times bestseller list and named to over a dozen “Best of the Year” lists. Thanks to Covid,  Nezhukumatathil, an Oxford resident, never had a chance to read from her heralded book in her adopted hometown – until now.

It will be a treat on Sunday to pull up some shade and soak in her paeans to the natural world including her beloved Catalpa tree which she’ll be able to see from the stage of the Grove.

Aimee has announced on her Facebook page that CBS Sunday Morning will be in the Grove Sunday to film her Thacker appearance as part of a profile of her the show will air this fall. With sunny skies forecast and a southern breeze, the Grove will indeed be a world of wonders.

Aimee and her family have made Oxford their home. She told us on a previous Thacker appearance, “Oxford is the only place I’ve ever been where people didn’t ask me what I am.”

World of Wonders – In Praise of Fireflies, Whale Sharks, and Other Astonishments was a finalist for the Kirkus Prize and was named Barnes and Noble’s Book of the Year. It was also named a Book of the Year by the New York Times, NPR, Wall Street Journal, Smithsonian Magazine, Lit Hub, Indie Next, Esquire, Garden and Gun and the New York Public Library

She lives in Oxford with her husband, the writer Dustin Parsons, and their two sons.

Windwalkers and World of Wonders will be for sale Sunday in the Grove with the authors on hand to visit and sign copies.

Hang out, hear some tunes and get inspired to do your own wingwalking.

Sunday, June 5 at 6 pm – The Thacker Mountain Radio Hour returns to the historic Grove on the campus of the University of Mississippi to kick off the Summer Sunset Series. This year we’re toasting our friends at the Yoknapatawpha Arts Council and their 50th anniversary! Following our show, stick around for rock band, Madrik!

Come to listen, stay to dance!

Guests on the Grove show:

Hosts:  Jim Dees and our house band, the Yalobushwhackers

NOTE: No live broadcast, this show will be recorded for air this summer.

Keep up with our friends at the Yoknapatawpha Arts Council.

Summer Sunset Series is a community event made possible through a collaboration of Visit Oxford, Yoknapatawpha Arts Council, the Center for the Study of Southern Culture, the University of Mississippi Museum, the Ford Center for Performing Arts, the Oxford-Lafayette County Chamber of Commerce and the Mississippi Arts Commission.