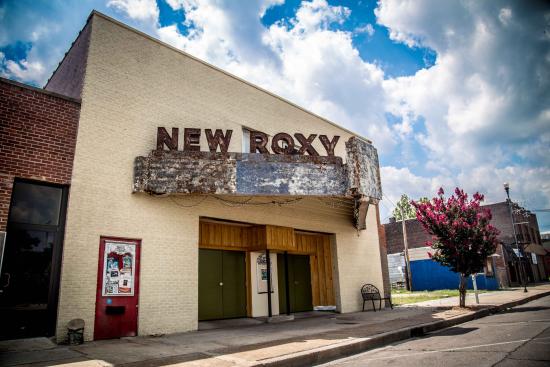 The Thacker Mountain Radio Hour returns to the Juke Joint Festival in Clarksdale, MS Friday, April 12 at 6 pm at the New Roxy Theatre, located at 363 Issaquena Ave. Admission is free. The New Roxy is a unique venue: there is no roof so it is basically an outdoor venue. Lawn chairs and weather awareness encouraged. A cash bar and food service will be available.

Hosts for the show are Jim Dees and Thacker house band, the Yalobuswhackers. Guests will include urban planner and author John C. Henshall and blues musicians, the Reverend Peyton’s Big Damn Band and the blues duo, Cadillac John Nolden and Bill Abel.

This show will not be broadcast live but will be recorded for air this spring on Mississippi Public Broadcasting and Alabama Public Radio.

John C. Henshall is the author of Downtown Revitalisation and Delta Blues in Clarksdale, Mississippi – Lessons for Small Cities and Towns (Palgrave Macmillan). The book covers how Clarksdale has revitalized its downtown based on the town’s intimate association with blues music and culture. Henshall highlights underlying trends in downtown decline and revitalization in cities and towns in America, together with commentary of his own experience in his home country of Australia.

Henshall is an urban economist and city planner who has worked with organizations in industry, government and consulting, both in his native Australia and abroad. He has a keen interest in small town development and the factors that drive their economic revitalization.

“Cadillac” John Nolden is a 92-year-old (as of today, Happy Birthday Cadillac John!) blues harmonica player, songwriter, and vocalist from Renova, Mississippi. Nolden and his current partner, guitarist Bill Abel have played regularly at clubs and venues across the Delta including the King Biscuit Blues Festival, the Sunflower River Blues & Gospel Festival, the Highway 61 Blues Festival, and the Yazoo Blues Festival. In 2000 they released the CD, Crazy About You, which contains five originals from Nolden. In 2013, Nolden released Red’s Juke Joint Sessions Vol. 1 with his band, the Cornlickers.

Bill Abel grew up in the Mississippi Delta town of Belzoni playing blues with local blues men most notably Fat Possum recording artist, Paul “Wine” Jones. Later in his career he honed his guitar style by playing and touring with T Model Ford and Cadillac John Nolden. In a 30-year career, Abel has headlined many festivals in the U. S. and Europe. A unique feature of Abel’s performances is he often plays homemade cigar box guitars using driftwood from the Mississippi River. His most recent solo release is the album Celestial Train.

The Reverend Peyton’s Big Damn Band is a three-piece country blues band from Brown County, Indiana. Their most recent CD is Poor Until Payday (Thirty Tigers). Reverend Peyton plays a 6-string guitar in the country blues, finger-picking style. His wife, “Washboard” Breezy Peyton plays a washboard with the percussive power of a New Orleans drum line, and drummer Max Senteney plays a drum kit that includes a 5-gallon maple syrup bucket. Together they play “wildman country blues” that’s “as much ZZ Top as it is Bukka White.”