Saturday at 7 p.m. on Mississippi Public Broadcasting (90.3 FM in Oxford)

(All times Central except where noted).

Before COVID-19, the show was broadcast every Thursday from Off Square Books on the Oxford square with a live audience. Since the pandemic erupted last March, The Thacker Mountain Radio Hour has switched to in-studio shows at Oxford’s Taproot Audio Design, without an audience. Authors and musicians send in their performances electronically. Dees interviews authors via phone or teleconference. The show will continue that arrangement at least through this spring.

“We certainly miss our live audience,” Thacker producer Alice Pierotti lamented. “Many of them have become our friends over the years and we’re so ready to see everybody again as soon as it’s safe. At the same time, we feel very fortunate to be able to stay on the air thanks to the support of our listeners.”

With Giovanni and Rush, this week’s season opener boasts two very accomplished veterans in their respective genres. Giovanni self-published her first book of poetry, Black Feeling, Black Talk, in 1968. It was a breakout hit, selling 10,000 copies and established her as a major force in poetry, a distinction she carries today, some two dozen books later. Her latest is the warm-hearted, yet fierce, collection,  Make Me Rain: Poems & Prose. 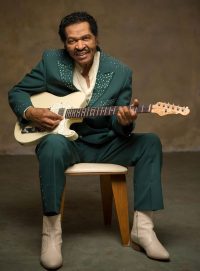 Still rocking at age 86, bluesman Bobby Rush has released hundreds of records over his 50-year career culminating in a Grammy award in 2017 for his album, Porcupine Meat. He wrapped up 2020 with a cameo in the latest Eddie Murphy Netflix hit, Dolemite Is My Name. Rush’s current album, Rawer Than Raw, is an acoustic tribute to his favorite Mississippi blues artists such as Howlin’ Wolf and Elmore James. On the Thacker premiere, Rush spins tunes from the album and talks to Dees about his love of blues and his own bout with COVID.

The show is keeping its fingers crossed regarding its annual Friday night Double Decker Arts Festival performance in Oxford in late April, as well as possible roadshows – COVID permitting – in the spring and summer.