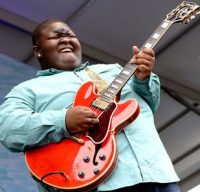 By Jim Dees – The careers of writer David Sheffield and blues musician Christone “Kingfish” Ingram (pictured) – are case studies in how to go for it, reach the pinnacle of your profession and stay true to the heart of your hometown.

You can hear them both Saturday May 1, along with roots duo, Sugarcane Jane, on Thacker Mountain Radio Hour. The show was recorded on August 27, 2016 at the Mary C. Cultural Center in Ocean Springs, MS.

How did these two Mississippi homies achieve these heights? The usual suspects: talent, hard work and – in Sheffield’s case – the men’s room attendant at Studio 54. More about that shortly.

Kingfish started as a youngster enrolled in blues classes at the Delta Blues Museum in Clarksdale under the tutelage of Johnnie Billington. Billington was known for giving guitar lessons out of his garage in Lambert, MS before moving to the museum. (Billington was featured in a 1999 PBS series River of Song, about music along the Mississippi River. He died in April, 2013).

Kingfish’s late mother, the beautifully named Princess Pride (she was a cousin of singer Charlie Pride), was an enthusiastic manager of her son’s career until her untimely death on December 4th, 2019 at age 49.

Princess lived long enough to see the May 14, 2019 release of her son’s debut album, Kingfish, on Alligator Records (with appearances by Keb’ Mo’ and Buddy Guy). The album debuted at #1 on the Billboard Blues charts. Rolling Stone was moved to muse if Kingfish is the “savior of the blues” and compared the 21-year-old to Hendrix. The album went on to be nominated for a Grammy in the Best Traditional Blues category.

Kingfish shredding in front of delighted fans in the balcony of the Mary C. Cultural Center in Ocean Springs, MS in Aug. 2016

David Sheffield’s road from Gulf Coast rat to the bright lights of 30 Rock, began in his early 20s when he was living in Ocean Springs. In 1980 he received a call from a friend in New York, Pat Weathers, a struggling actor and comedian from Hattiesburg, MS. He worked as the men’s room attendant at Studio 54, the-then notorious disco known for celebrities, cocaine and debauchery – or is that redundant? Weathers was auditioning for SNL (he eventually became a Not Ready For Prime Time player for a year) and told Sheffield to write some sketches and overnight the material and he’d give it to the show’s producers.

Sheffield stayed up all night and wrote several sketches and sent them to Weathers that morning.

Weathers called back and said they loved them and for David to contact one of the producers.

“I forget. The one with the glasses,” Weathers replied.

Sheffield actually called Saturday Night Live and asked to speak to “the producer who wears glasses,” and, of course, they hung up on him. But, through the intervention of yet another Mississippi transplant in NYC, Cindy Kennedy of Biloxi, (seems 1980 Manhattan was awash in coastal ex-pats) Sheffield eventually reached the producer, Alan Stern, who asked Sheffield for more sketches. And more. For six weeks, Sheffield sat in Ocean Springs and pounded 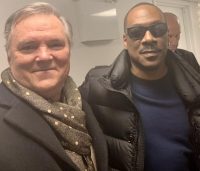 out sketches for Saturday Night Live until he was finally hired.

At SNL Sheffield met his writing partner with whom he still collaborates, Barry Blaustein.

“We were paired with Eddie Murphy, who was also hired that year. We were all 19 or 20 years old and got along,” Sheffield told Deep South Voice.

Sheffield shared in the writing of classics like the Buckwheat sketches, Mr. Robinson’s Neighborhood, Ebony and Ivory, and the infamous James Brown’s Hot Tub sketch.

Sheffield and Blaustein, along with Murphy and Kenya Barris, are writers of Murphy’s current hit film, Coming 2 America. The movie was released March 4 on Amazon Prime and immediately shot to number #1 in the Nielsen ratings with over 1.4 billion (with a “B”) viewing minutes in the first week of its release.

This tale of two talents – Kingfish, just starting out with so much promise, and David Sheffield, still delivering on his early promise –  offers a simple lesson: You don’t have to be from Hollywood or New York or Chicago, you just have to be.

Be good. Be strong. Be true.

And it helps if you know the guy who runs the men’s room.

Hosted by Jim Dees and house band, the Yalobushwhackers.

Air times – Online and on air: