It’s been said there was a “Golden Age” in Oxford, perhaps roughly from the 1980s, through the early 2000s.

In the late 80s, early 1990s, across a three-block area, one could wonder at the magic-filled shelves of Square Books; enjoy a $2.99 plate lunch at the Gin; snag some 89 cent rolling papers from Willie at Local Color; say hey to Ronzo at the Hoka and hear about a movie he swears is, “The Finest!”; stroll past the Ice House (spring-fed ice, not condos) and the Hippy Hotel (steep stairs at low prices); ease up to Van Buren Avenue, off South 14th (behind City Hall), and there you would find the residences of the band Blue Mountain and their wacky next door neighbor, Barry Hannah. Both of them woodshedding away at their work. 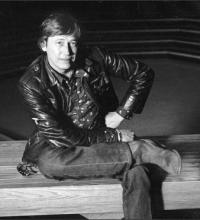 Hannah was a good neighbor to the Hoka since his arrival in 1984. The original cool customer. He would often invite Ronzo and me up to his house for a late-night supper and show us what he had bubbling on the stove. “Cooking,” he called it. As he stirred the pot, we winced at the sight (and smell) of whatever it was. Like that Charlie Chaplin scene where Chaplin cooks (and eats) his shoe. We politely demurred on his cooking but reveled in his friendship and the jazz word play of his novels. No one has written like Barry before or since. 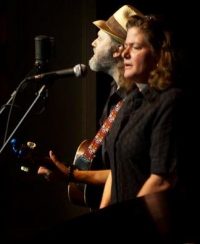 would occasionally drift down for a snack or a brief hang. They were regrouping after Laurie’s twin brother, John, left their previous band, the Hilltops, to form Wilco with Jeff Tweedy. Barry suggested their sound could use a French horn and he sat in with them onstage at the Hoka one night to prove it. His award-winning prose read like Hendrix meets Miles but his horn playing was more of the keep-your-day-job variety.

So yes, if the definition of “Golden Age” is being surrounded by insanely talented and creative people – and I haven’t even mentioned the painters, sculptors, carpenters, chefs and artisans of the day – then, yes, I guess Oxford had a “Golden” something. Certainly for a town its size and location. (A “boondocks avant garde,” as the great Willie Morris put it).

Flash forward to 1997 and the Thacker Mountain Radio Hour was born at the newly opened Off Square Books (formerly Denton’s Furniture store) with a young Cary Hudson of Blue Mountain on, of all things, fiddle. Tommy Bryan Ledford, soon-to-be-Kudzu King, sang lead with world-class songwriter-vocalist Caroline Herring. Future novelist Jamie Kornegay was the gonzo producer and mastermind, while Richard Howorth provided the venue and sustenance without surcease.

Flash again: Twenty-five years (and hundreds of authors and bands) later to 2022. Cary Hudson, Bryan Ledford, Jamie Kornegay and Richard Howorth, all major forces in the Golden Age, are returning to pay tribute.

Many friends from that time are now ghosts, such as Ronzo, Duff Dorrough, Jim Dickinson, and so many, many more. But, as the poet said, they’re merely in the next room.

This Thursday, as we have on Thursdays for the past (almost) 25 years, we’ll gather to perform our radio show – now out of the furniture store and onto the waves of the world wide web. We’ll be joined by some of the original voices from 25 years ago. We’ll revel and recall, laugh at the sorrow and cry at the happiness and maybe eat a chicken tender.

At some point during the show or after party, we may look around and think, okay, if there was a Golden Age, this one ain’t so bad either.

As Ronzo would say, “Stop around if you’re in town!”